Making Time for Research: Why Research Helps and How You Can Help Research 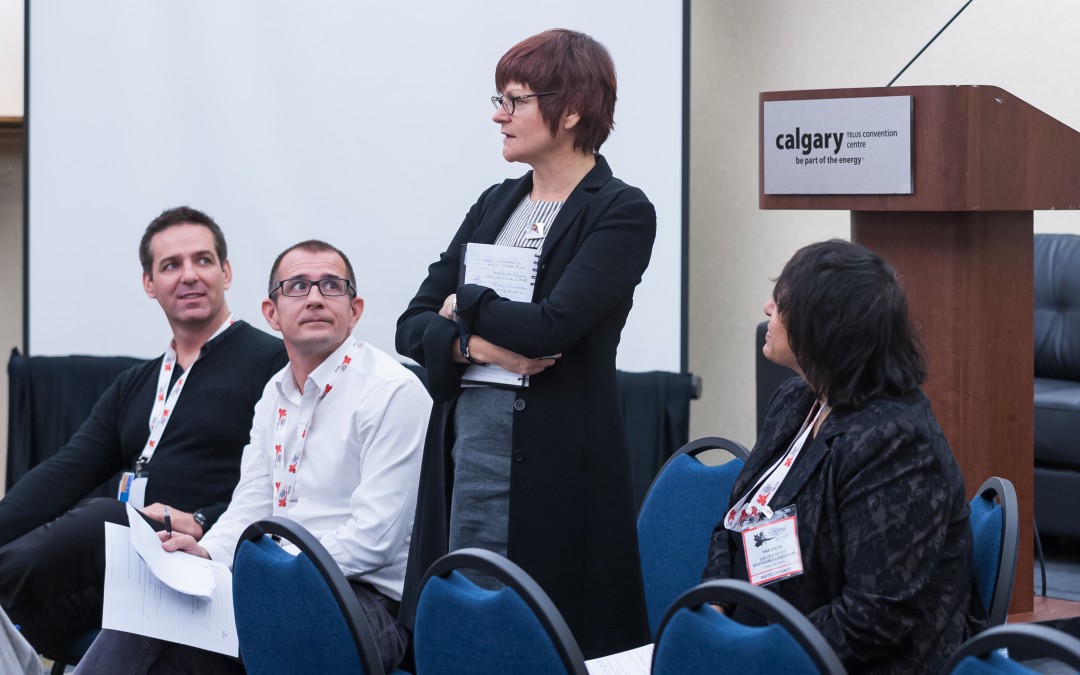 Too often practitioners and researchers find themselves on either side of a linguistic, technical, and cultural divide. Building on a pre-SEWF 2013 research day at Mount Royal University, this session looks at how then can this relationship be explored in a way that honours the contribution of both researchers and practitioners.

This session was moderated by Tina Dacin, Director, Centre for Social Impact, Queen’s School of Business and featured:

A special thanks to session sponsor Enterprising Non-Profits (enp) Canada.

Unfortunately, only the remarks of Ms Bouchard were recorded.

Marie Bouchard: I’m very pleased that I was invited to this conference. This is my first Social Enterprise World Forum, my first time ever in Calgary so I’m really happy and I thank the organizers for inviting me. I will present a few projects in which we produce research with the partnership of social actors. So it’s with great humility that I will present this limited experience that we have, but it may give an idea of what we talk about when we talk about partnership research.

In Canada this research model, which is according to scientists a new research model, you study inside the conception of the project. It has been supported by the Canadian Research Council for many years. We’ve created community university research partnerships for ten years on the social economy and on other topics.

There’s been a Canadian research initiative creating six regional nodes across Canada, an international node, and a national hub which was co-directed by actors and researchers in universities and in networks of the social economy. We have a new thing in Quebec called Territoires innovants en economie sociale et solidaire so Innovative Territories and Social and Solidarity Economy, which is a research and liaison center. It will not do research, it is forbidden to do research in there. What you need to do is take research and bring it into practice. So this is starting this year.

There are basically six elements of any research project. My students will recognize the list. You need to have a problem, a question, you cannot just have theory in mind, you need to try to solve something, but the question could be theoretical or it could be practical.

You need to know already what exists in terms of response, of answers to this question. Did someone already answer this question and how? So you need the state of the art. You need to have then a question that can be transported into observation, data analysis.

How are you going to analyze? You need a framework. You need to expose the stance that you’re taking. What are your preconceptions about this? Analysis is never neutral, it has a stance, it has a position.

You need to interpret the results. How are you interpreting the result, and then are these results generalizable and do they contribute to that state of the art of knowledge that you accumulated before that?

And then if you want to keep your job, you publish.

This is mode 1 of doing research. There’s an academic interest, there’s a disciplinary context to which you contribute. The conversation is among researchers of the same discipline and the question you’re asking yourself, how do I contribute to this conversation?

Then there’s another mode of doing research which starts more with applied utility and is more an engineer model of research and it often brings people from different disciplinary contexts together. I’m an inter-disciplined social researcher as I’ve been around different disciplines. Often, if you’re looking at strange objects such as social enterprises, you probably want to have more than one discipline to  expose your research to.

There is an idea that traditional science kind of has come to some of its limitations By the way, I am not an economist, so I’m not sure how an economist’s standard inside the corpus of economy would look at social enterprise, but it would probably lack some vocabulary to understand what’s really going on here.

I’m going to talk about three small projects. I’m going to talk quickly about three projects that are not necessarily short: a governance tool for board member, a conceptual framework for statistics on the social economy in Quebec, and a data base for analyzing social innovation and social transformation.

First is governance. Practitioners come to my office and say we find things happening with board members that we don’t quite understand how to solve. If we look at a traditional governance manual, you know, ‘what you should do’; we don’t find answers to what’s happening. We have people in small organizations and communities; board members have to come and do things with the CEO but then the next day they have to evaluate the CEO. Sometimes they have to be outside the organization representing the organization, and they don’t exactly know how to do it in one voice representing somebody else, but themselves.

So you take a corpus of knowledge, you bring it to the people and you organize in teams and test and validate with social actors. It’s a tool which we put on a website so there was free access and used the reflexivity of these actors in conceptualizing the tool.

The second example was the Institute of Statistics of Quebec. The national statistical agency came to us saying ‘how do we measure the social economy in the economy?’ Of course as soon as you start saying ‘how do you measure social economy?’ you have to define what is ‘social economy’, what is ‘social enterprise’. That’s why I have all these people talking. It’s like an astronomer asking the stars what they are and they all start talking, and you’re trying to understand the configuration of all this.

We organized sessions. They were organized by the ministry responsible for social economy in Quebec, and they grouped six government ministries and agencies and social economy networks, around the table. For one whole year the researchers presented the results of their research and each time it was confronted by all these people who always disagreed about social economy and what it should be and what it is. And at the end of this whole year we have a framework, people will say we argue about what it is, but now we have vocabulary with which to do it.

And this vocabulary was translated into a law which is about to be passed in Quebec, and the ministry writing this law said ‘thank God we had the statistical framework because it helped us out’. So this is starting from a practical and highly political question and how research helped bringing it to a, not  a scientific revolution, but something that is quite useful today.

The third case is, I work in a research center called Center for Research on Social Innovations, we’ve been doing case studies for many years. We have more than three hundred organizations on which we have a case study and all about social innovation. Each of these case studies, as theory of case study says, is a world in itself. It’s representative of something higher and this has already been exploited in terms of data, but there’s still tons of data in there that’s not been exploited and it’s impossible to exploit just reading them one after the other, that’s the problem with case studies.

What we’re trying to do now is a relational database with all the information in those case studies so we can interrogate the data differently. We can data mine our case studies in order to see something that we’re looking for in social transformation. If you’re doing social innovations because you’re trying to change something how is this change happening – is it happening cross-sectorally, longitudinally, in which space, and then you make these variables and talk about patterns, trajectories, systems of innovation, how this is on the way.

The state of the art is not only in books, it’s also in tacit knowledge. We started calling ‘social economy’ what we were looking at and people said ‘no, no, no we’re not doing social economy’, and one of those persons was Nancy Neamtan who’s now CEO of Chantier de l’économie sociale, one of the important leaders in social economy. In the beginning for her the notion of ‘social innovation’ did not exist. When you’re doing things, do you know you’re innovating? You’re just responding to needs and you have aspirations to change.

Tacit knowledge is really the material we’re working with when we’re doing partnership research in terms of methodology.

We co-designed the project from the start. The first meeting we sit around the table in which there’s only white pieces of paper and pens, no one has a plan. So we discuss for quite a while before we decide to do research. It needs to be research that fits needs but at the same time fits an agenda in the academic world. So where does that fit? How do you create that?

The reflexivity in the analysis and a sort of translation of that from researchers into the academic world brings a lot of public recognition to the work that people are doing on the ground.

In terms of knowledge mobilization, we’re now talking about transfer: how did practices inside the organizations and network change after doing the research in this partnership way?

On the question of making time for research, when we first started doing partnership research there was people on one side of the table and people on the other side of the table and they didn’t understand each other, and it was normal. And then there was a moment where there were rupture between these two groups. You’re not doing it fast enough, you’re not answering this question fast enough, it’s not practical the way you’re doing it, you have a doctoral student doing a thesis on this, and we want answers now.

The timing of the research has to be adjusted the way actors want and then how they formulate their questions, their practical questions, and you need to look at how it will translate into a research project and program. With time what we learned after ten years of doing this, we both had learned, and we could now think of research projects that involved the agenda of an academic and the timing of a practitioner and make it work.

So if you’re curious you can see these on our websites. Thank you very much.

A special  thanks to Photos With Finesse by Suzan McEvoy for the pictures, BizBOXTV for producing the videos, and Employment and Social Development Canada for helping to make this post-event coverage possible.