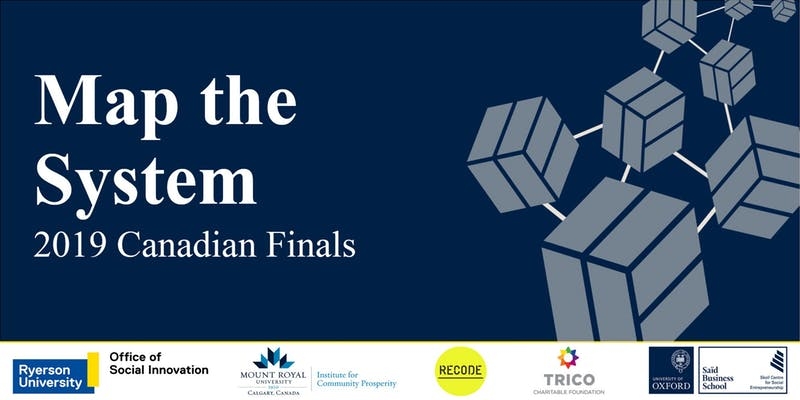 On May 4th, 2019, 15 schools gathered in Toronto for the third Canadian edition of Map the System, organized by the Institute for Community Prosperity, in partnership with the McConnell Foundation’s RECODE Initiative, the Trico Charitable Foundation and the Skoll Centre. Map the System is a global competition that asks us to think differently about social and environmental change. It requires students to showcase their understanding of system-level social and environmental challenges. Unlike a traditional pitch competition, students in the Map the System are evaluated based not on a ‘solution’ to a problem, but rather on the depth of understanding of the problem.

A record 700+ teams (representing 1400+ students) participated in Map the System competition this year, in campuses across Canada. Top teams from across the country who were selected as finalists presented their research to a panel of judges and competed to win prizes the top two teams would move onto the international competition at the University of Oxford in June.

The top 6 teams that made it to the final presentations were (in alphabetical order): Concordia University, HEC Montreal, Mount Royal University (MRU), Ryerson University, Simon Fraser University (SFU), and University of Toronto (U of T). Please see here for a document the Institute for Community Prosperity had created to showcase all 15 teams. It includes an overview of their topic, team members, and educators.

Congratulations goes out to MRU, SFU, and U of T for advancing to the Global Final hosted at Oxford University! Originally, the plan was to send two teams, but ultimately three teams were deemed worthy by the judges so the three teams get to go to the Oxford finals again!

An interdisciplinary group of SFU and UBC students came together to explore the growing wildfire crisis in British Columbia. Through extensive research and first-person interviews, the team mapped out the social and environmental impacts of wildfires, identifying levers of change along the way to tackle this regional crisis.

Congratulations to all of the participants for a fantastic weekend and best of luck to the three teams presenting their research on the international stage in Oxford, UK next month! A special thanks to to MRU’s Institute for Community Prosperity for running this year’s Canadian Challenge and Ryerson University for hosting.